Boy do I love a delicious orange Julius.  I drove 15 minutes out of my way and back to grab the largest one they sold, less than an hour later my cup is empty and I am doing the math to see if I have time to go get another one.  I mean look at it.

It looks absolutely wonderful.  I’ve never passed an Orange Julius store without stopping to get one.  The beauty of a chain like Orange Julius is that great efforts are made to ensure that the food is consistent from store to store so that their delicious orange, milk and ice beverages are the same every time.  They do a great job.  That  is why I love Orange Julius.  Church on the other hand that’s more of a mixed bag and that in a nutshell is why I don’t love “church” as much as I love Orange Julius.  I know that is probably an odd statement for a Pastor to make, an  odd statement for someone who spends most days inside a church but the truth is I have a love hate relationship with church.  I love Jesus, how he taught us to live and the hope that can be found in the resurrection.  I love God and the life I believe he is calling us into.  I love the Spirit and the feeling I get when I feel the spirit moving through God’s people.  What I don’t love is that the word is so all encompassing,  for instance you can throw the word church on the end of the phrase Westboro  Baptist and all of a sudden it’s hard to love what that word “church” has become  . I looked at today’s reading and it didn’t help much.

1 Chronicles 21:1-17 (NRSV)Satan stood up against Israel, and incited David to count the people of Israel. So David said to Joab and the commanders of the army, “Go, number Israel, from Beer-sheba to Dan, and bring me a report, so that I may know their number.” But Joab said, “May the Lord increase the number of his people a hundredfold! Are they not, my lord the king, all of them my lord’s servants? Why then should my lord require this? Why should he bring guilt on Israel?” But the king’s word prevailed against Joab. So Joab departed and went throughout all Israel, and came back to Jerusalem. Joab gave the total count of the people to David. In all Israel there were one million one hundred thousand men who drew the sword, and in Judah four hundred seventy thousand who drew the sword. But he did not include Levi and Benjamin in the numbering, for the king’s command was abhorrent to Joab.

But God was displeased with this thing, and he struck Israel. David said to God, “I have sinned greatly in that I have done this thing. But now, I pray you, take away the guilt of your servant; for I have done very foolishly.” The Lord spoke to Gad, David’s seer, saying, “Go and say to David, ‘Thus says the Lord: Three things I offer you; choose one of them, so that I may do it to you.'” So Gad came to David and said to him, “Thus says the Lord, ‘Take your choice: either three years of famine; or three months of devastation by your foes, while the sword of your enemies overtakes you; or three days of the sword of the Lord, pestilence on the land, and the angel of the Lord destroying throughout all the territory of Israel.’ Now decide what answer I shall return to the one who sent me.” Then David said to Gad, “I am in great distress; let me fall into the hand of the Lord, for his mercy is very great; but let me not fall into human hands.”

So the Lord sent a pestilence on Israel; and seventy thousand persons fell in Israel. And God sent an angel to Jerusalem to destroy it; but when he was about to destroy it, the Lord took note and relented concerning the calamity; he said to the destroying angel, “Enough! Stay your hand.” The angel of the Lord was then standing by the threshing floor of Ornan the Jebusite. David looked up and saw the angel of the Lord standing between earth and heaven, and in his hand a drawn sword stretched out over Jerusalem. Then David and the elders, clothed in sackcloth, fell on their faces. And David said to God, “Was it not I who gave the command to count the people? It is I who have sinned and done very wickedly. But these sheep, what have they done? Let your hand, I pray, O Lord my God, be against me and against my father’s house; but do not let your people be plagued!”

I need an Orange Julius after reading that, seriously I’m leaving my computer and getting one right now. 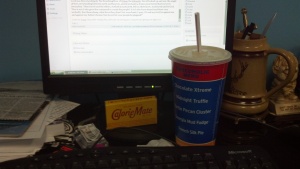 Ok that’s much better.  So in this reading David makes God angry by trusting the size of his army (taking a census) rather than trusting God’s power.   So maybe Hannibal Lector was just a misunderstood follower of this anti-census God. Seriously though let’s look at how God responds.  He gives David a choice 3 years of famine, 3 months of being ravaged by an army or 3 days of God’s punishment.  David takes the merciful option and God shows further mercy my not destroying Jerusalem.  No God “only” kills 70,000 people.    That’s a lot of deaths! Its over 23 9/11 attacks, its 76 Jonestown massacres  2592 times more than the Sandy Hook shootings, 4666 more than the Columbine shootings.  It’s more than was lost in any single battle in american history, Antietam is considered the bloodiest day in american history and this is still 3 times more deaths than Antietam.  And to be clear this death toll is to be thought of as a sign of God’s mercy because it could have been worse.  And to top it off the guy who made the mistake to cause all of this, King David, he is left unpunished.  The message seems to be do what God says, or else you will face  punishment unlike any other.  The truth is a lot of Churches have that sort of message too they just trade a plague for hell.  From what I can tell hell is a small town in Michigan.  It is also possible people are talking about this place.  That site by the way is the third link listed when you Google search hell which means when some random person wonders what this Hell thing Christians talk  about is, they will most likely find a site like the one I just linked to , or Wikipedia, which is always accurate.  The point of all this is that when people look at this view of Christianity and this view of God they want no part of it.  This God whose mercy isn’t very merciful, this God whose punishments are beyond imagining is a God people want no part of.  Now most Christians (I think) have a much more Gracious understanding of who God is.  They understand God to be full of Grace, forgiveness and love.  This is the God of all Good things the God of the footprints poem.  But that takes me back to Orange Julius.  The reason chain restaurants have such strict standards is because you never know which customer is trying your product for the first time.  Imagine if my first Orange Julius was rancid, it would have been the only one I ever tried, I wouldn’t have Gone back.  And that is why I don’t like churches, because we all get lumped together, people think we are all the same, people think all Christians have the same understanding of God and the obvious truth is we don’t.  No the truth is God is bigger than we can picture, whatever we say God is, we can be sure that God is in fact bigger than our words.  That goes for the Bible too, we can’t look at this one story and say this is how God operates, even in we read the whole bible thousands of times our errors in perception  logic, reason, memory and so much more will skew our vision of who and what God is to some degree.  But I don’t think we are left with a God who is imperceptible  we just won’t get the whole picture.  I would say start with the words Grace, love and forgiveness to describe God explore who God is from there.  I am sure someone would say that other words would be more important to start with, but that just goes to show you that Christian understandings just aren’t as consistent as Orange Julius’

As an aside writing this inspired me to find a recipe to make Orange Julius at home and each site gave me the same recipe, talk about constancy!

1
-Combine all ingredients, except ice cubes, in blender.
2
-Blend 1-2 minutes , adding ice cubes one at a time, until smooth.